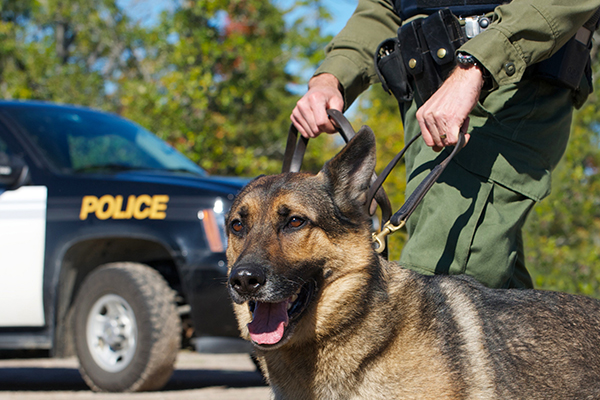 Questions often arise when canine drug searches in Philadelphia occur. The experience can leave you feeling violated, especially if the animal picked up a scent; accurately or inaccurately. Feelings aside, these searches are frequently performed illegally, and when that happens, it’s important to have an experienced canine drug searches lawyer fighting for your rights. The trouble is, it’s not always easy to detect whether officers and their K-9 companions are adhering to legislation, or what to do when you believe they aren’t.

The hard truth is that law enforcement has the legal right to allow their K-9s to sniff around your vehicle, and they do not need a reason to have the dog present. At one point, officers were required to have “articulable suspicion” in order to bring their dog to your vehicle. In other words, they needed to have a reason to stop the vehicle, and they also needed to have a reason to believe that drugs were in the vehicle before involving a dog. However, the Supreme Court made a landmark decision in the 2005 Illinois v. Caballes case, as it was determined that the air outside one’s vehicle is public space. Therefore, having a drug-sniffing dog present, and actively sniffing, is not considered a search.

There are a few caveats to lawful canine drug searches. First, officers still need a reason to stop a vehicle. Secondly, they may not detain a driver while the animal sniffs. In other words, if the driver is not receiving a citation, the officer cannot keep him there while the dog sniffs, nor can an officer hold a driver after a citation is issued to allow the dog more time. Lastly, the dog may not sniff inside the vehicle unless it indicates the presence of an illegal substance while sniffing outside. The dog alerting the officer of the presence of a substance serves as reasonable cause, and gives the officer the lawful right to perform a physical search of the vehicle and its occupants.

It’s also worth noting that K-9s have highly-attuned noses, to the point where one may sniff out even trace amounts of a substance. Due to the prevalence of cocaine and marijuana in our society, trace quantities of these substances can be located all over, especially on paper money. It is not unusual for a drug dog to “alert,” only to find cash on the dashboard that has traces of drugs. The courts understand this and do not consider a positive alert to be a sure sign that the vehicle or its occupants had drugs.

Unfortunately, law enforcement does not consistently follow regulations, and the civil rights of average citizens are frequently violated as a result. In cases where police officers conduct unlawful searches, an experienced canine drug searches lawyer can convince the courts to throw out any evidence that was gathered. Without evidence, the case loses steam and the charges are usually dropped. If you or a loved one is facing drug charges and you believe law enforcement may have acted unlawfully, you must retain an attorney who will thoroughly research the events leading up to the arrest. The attorneys listed on this site have the experience and the dedication to ensure every possible avenue is followed, so that your charges will be reduced or dismissed whenever possible. Take a moment to review the profiles and reach out to the ones you believe are a good fit, so you can start building your case right away.